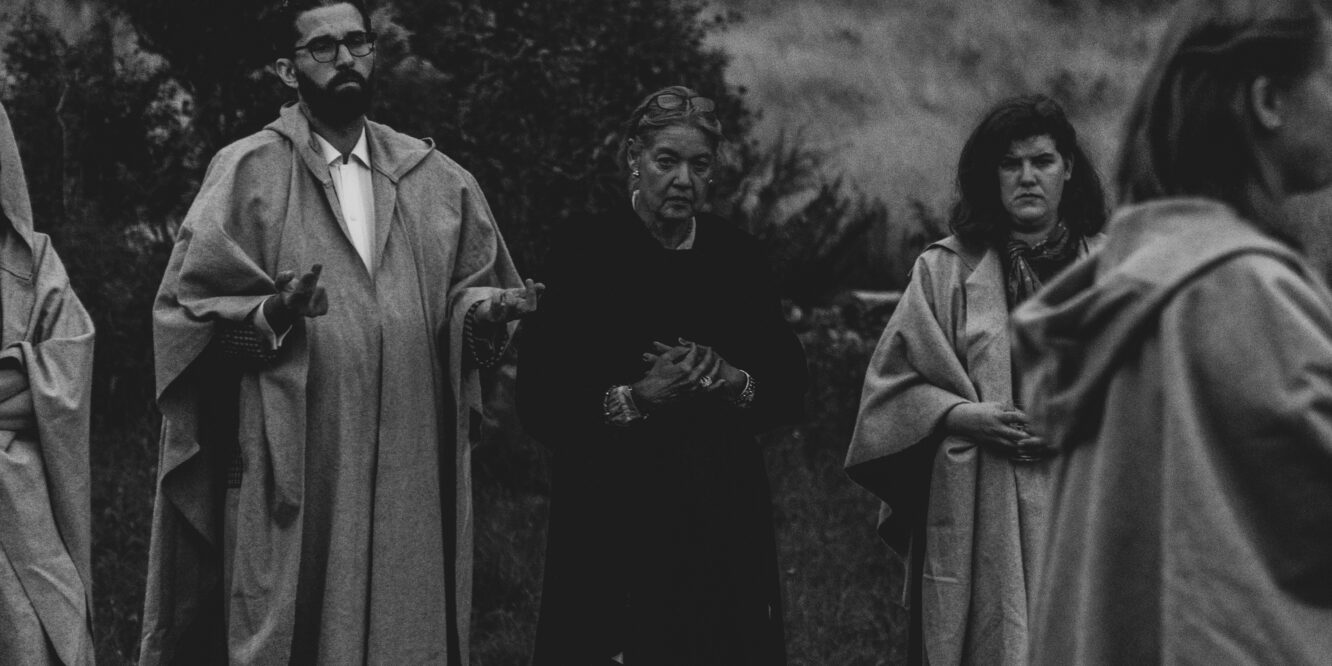 The larp is set in the early of the 1950’s somewhere in the outback of the Washington State.
The exact time and location is not important to the larp since the experience focuses on a group of people that for different reasons have chosen to separate themselves from the surrounding reality, living a reclusive life far away from the rest of the world.
In a small cabin called the Ranch, owned by the Chapters spiritual leader A. Parker, a small group cohabits. They all take part in daily chores, argue about whose time it is to clean the bathroom, and raise the children of the group together like one big happy family.
There is a great focus on self indulgence in the doctrine, ”Thy own will shall be the only law” being the first commandment, meaning that you are entitled to self-fulfilment. However, whose self-fulfilment trumps the others when there are contradicting wills? Radical honesty is spiritually ingrained in the group, still more than one secret lurks under the surface. What happens when they reach their boiling point?

The commune has its own set of rules and norms that highly deviates from the world around them. At the ranch free love and polyamory is the norm and monogamy is frowned upon. At the ranch the use of different mind-altering drugs and alcohol to reach further enlightenment is seen as normal. At the ranch it is completely forbidden to utter a lie, ”Truth will Set you free” being the second commandment of the group.

This has lead to a very toxic codependent culture that quickly makes the members of the church lose themselves in this new strange world. As the pursuit to bring forth The Antichrist continues the personal relationships of the Chapter becomes more and more infected and destructive.

Workshops
There will be workshops on site helping you to create closer bonds with the other characters and players as well as co-creating parts of the rituals and norms of the commune.
We will also go through the techniques for drugs, sex and violence.

Sex drugs and alcohol
At this larp sexual acts will be played out theatrically, and we will go throu safety mechanics and meta techniques at the workshops.
To be able to participate at this larp you need to be comfortable with other peoples partial or total nudity but you will not be required to be naked if you don’t want to.
Drugs will off game naturally be forbidden in accordance of Swedish law.
Moderate alcohol consumption will be ok during the larp but we will ask you to not get intoxicated and we will take the right to remove you from the larp if we feel you are too intoxicated to make safe judgements in game.

Acts
Lord of Lies is played in three acts.
Act 1- The Community
Act 1 takes place the day and night before the big ritual which will include impregnating the Chosen One so that she can give birth to the real AntiChrist. It is meant to set the tone of normalcy at the Ranch. The ritual is exercised, daily chores carried out, relationship issues is being vented and the night is as every night a drug-fueled haze.

Act 2- The Conflict
Act 2 takes place the day after act 1. This is when status quo will start to shift, new alliances might start to form within the internal hierarchy. Conflicts come up to the surface and cracks are showing on the smooth surface of the community. The act culminates with the ritual taking place and the subsequent party, either to celebrate or lament depending on how it happens and what the characters feel.

Workshops and Calibration Break
In between act 2 and 3 there will be a longer calibration break. Some might want to change characters, and that will be possible to do here.

Act 3- The Destruction
Act 3 takes place approximately 8 months after act 2. It depicts the last day in the community, the culmination of conflicts and uncomfortable truths coming up to the surface. This act is shorter and will give room for the final farewells and final resolutions for the characters before they all go their own ways.

Debrief
After the larp ends there will be a short check in, and an after hang out.